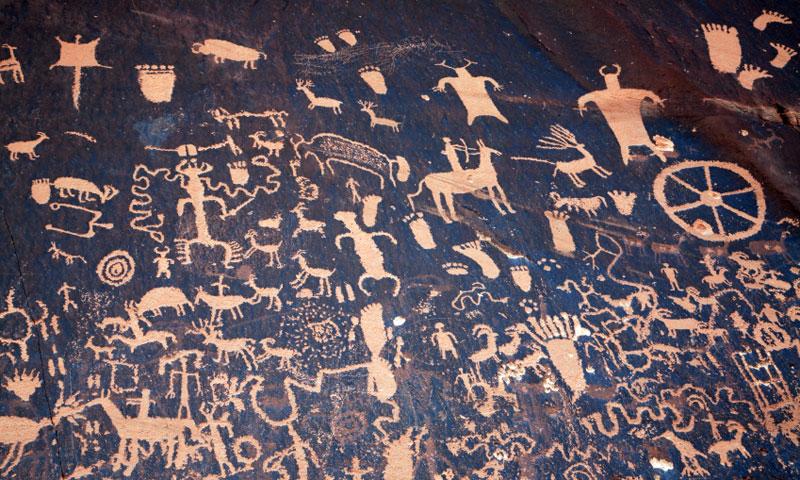 Formerly a state park, and now classified as a state monument, Newspaper Rock is a sandstone panel that contains one the largest collection of multi cultural ancestral rock carvings in Utah.

One of the most well known and largest petroglyphs in Utah, the sandstone panel known as "Newspaper Rock" has over 2000 years of history, over 100 rock carvings, and influences from the Basketmaker, Fremont, and Pueblo Indian culture. The carvings depict abstract forms, animals and humans. The carvings begin as early as 700 AD all the way up to the early 1900's.

Newspaper Rock State Monument is located on Highway 211 between Monticello and Moab-25 miles from the entrance to the Needles District of Canyonland. The panel itself is near a stream and trail surrounded by impassable vertical cliff walls.

There is no fee to view the panel and no amenities.

Enjoy the picnic area near the old campsite, but be aware of flash flood dangers in the wash. Small groups of petroglyphs are located on the cliffs to the south of Newspaper Rock. Climbers may be interested in the routes in Indian Creek Canyon and the Wingate Cliffs. Access is available from the road.

Note:The campsite was closed in 2006 because of flash flood dangers.

A dark manganese-iron deposit or "varnish" has blackened the panel over time and helps archaeologists date the petroglyphs.